Not So Common Sense > Blog > Thoughts > Batman vs Daredevil

So my brother posed a question while we were watching the first episode of Daredevil Season 2. In a fight between Daredevil and Batman, who would win?

I had no answer.

I struggled with the idea for at least a full minute, almost stopped the video so I could really break it down. This is what I came up with.

Batman vs Daredevil: the Combatants

First a note on Batman. Lately he’s been written as this unbeatable opponent who’s already thought of every contingency. Since you can’t surprise him, you can’t beat him. To me that’s no fun. While I believe given enough time and research Batman could in fact beat any opponent (including Superman), for the purposes of this scenario, let’s assume this is the first time these two have run across each other’s path. As such there has been no time to prepare.

Batman has been trained in multiple fighting styles from all around the world. This makes him a formidable fighter whether its in close quarters, single combat, or multiple combatants. He’s also been trained to fight with a number of different weapons as noted by fights against Ra’s Al Ghul using a saber. Little known fact, Batman has also trained with magicians and escape artists picking up their skill set as well. His strength, endurance and skills are that of a human at peak perfection.

Batman is also a brilliant tactician. He’s studied law and science among other fields. It’s his brilliant mind that makes him one of the worlds greatest detectives and drive him to try to prepare for any eventuality.

Daredevil was blinded at a young age by a chemical accident. As a result all of his other senses were heightened to superhuman levels. He also gained a ‘radar’ sense that allows him to use his senses as a sort of echo location to see the world all around him. Matt Murdock, Daredevil’s alter ego is an accomplished gymnast thanks to his enhanced sense of balance. Daredevil has been trained in several forms of martial arts including ninjutsu, aiki jujutsu, jujitsu, kung fu, capoeira, judo, aikido, wrestling, and stick fighting combined with American-style boxing while making full use of his gymnastics capabilities. His enhanced senses can be as much a weakness as a strength, as he can be overwhelmed by sounds and smells.

Matt Murdock is a lawyer by day having undergraduate degrees at Columbia and a law degree earned at Harvard. 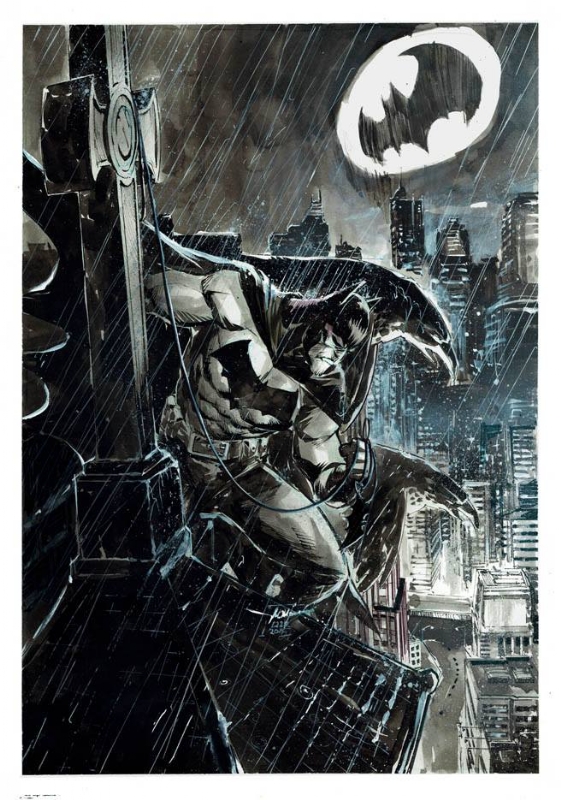 In my hypothetical scenario neither hero is in their native city removing their hometown advantages. However they are in a composite city of New York Hell’s Kitchen and Gotham structures. Batman spots Daredevil at the tail end of a rooftop interrogation, he’s trying to figure out where he is. All Batman sees is a man tied up hanging from a rooftop and a costumed person beating him. He immediately thinks something nefarious is up.

Batman enters the scene throwing some batarangs meant to stun the devil aggressor. Daredevil dodges all the projectiles, to Batman’s surprise, by either flipping out of the way or batting them away with his batons. Batman continues his attack questioning the red Devil who is able to match his skill [blow for blow]. So far Daredevil is on the defense and opts to get out of this fight by jumping off the roof.

Batman Vs Daredevil: The Chase The Bat and the Devil by Jon Buran

Batman is again surprised that his opponent would jump from the roof with no apparent grappling gear. When he reaches the edge of the roof he sees the red devil throw one of his clubs with a cable attached and swing to the safety of another building. Batman chases after him using his own grappling gun to cover the rooftop. Daredevil jumps, tumbles and runs across the neighboring rooftops keeping distance between him and the bat man following him. Throwing himself off another rooftop, Daredevil free falls for several stories before tossing his billy club again and swinging around to another rooftop then ducks out of sight.

Within the cover of the dark, Daredevil watches the bat-man land on the rooftop only seconds after he does. The bat-man moves near silently and it’s only because of his heightened senses that he can follow him. Batman moves cautious activating the night vision in his cowl. When he catches a glimpse of the red devil out of the corner of his eye he throws a batarang at him.

Again Daredevil dodges the projectile and throws his own billy club to his right. The club ricochets in a complex pattern changing direction until it finds it’s traget, Batman’s head. Daredevil moves in on his stunned foe tackling him to the ground. He then lays it into the bat-man pummeling his opponent. Batman takes the punishment and then throws the red devil off him. He throws a few smoke pellets to obscure and confuse the red devil. Daredevil steps right through the smoke, his radar vision allowing him to keep on fighting undeterred.

Batman vs Dardevil: My Victor

A quick note here on how evenly matched these two are. They can both switch fighting styles on the fly to suit their needs and play up on a strength. By the end of the brawl they’ve combined all their fighting experience to try to play up any edge. Batman’s experience fighting combined with the various fighting styles matches Daredevils heightened reflexes. The two fighters are physically matched.

But, Batman is observant. Watching how Daredevil moves, a slight cock of the head here, how he reacts to the sound of the smoke pellets. I think Batman would eventually figure out that his sense of sound can be used as a weakness. At this point Batman uses flash bang grenades to stun Daredevil and keep him off balance. Even if Daredevil starts to adjust to the loud sounds, he’s again on the defense. Batman can move in with other tricks from his utility belt: a barrage of batarangs and a bola to tie up the red devil. So there you have it. Two opponents so closely matched that it takes Batman’s more analytical mind to turn Daredevil’s strengths into a weakness.

Agree? Disagree? Let me know down below in the comments.