Without comment I give you the thrilling conclusion of this ninja short story. Are you ready? Me too! Here we go…

Okay. Three ninjas against me. Don’t think about it, just move. This was the last conscious thought I made before doing my best to check out of my brain in an effort to channel what has worked so far. The unarmed ninja attacked first with a low uppercut meant to slip under my guard and quick jab. I blocked both with my forearm in two quick motions, swinging down at the elbow then up, and followed through with my own attack: a jab to his face. The ninja took a step back but before I could press any advantage I had to duck under the arc of a nunchuck swing.

Nunchuck-ninja continued his attack swinging his weapon in all directions with practiced ease and control. His advance kept me on the move, circling backward and ducking all while I kept my eyes on the other two ninja. Tonfa-ninja stepped in swinging his T-shaped baton at the handle, a move that gave him the reach to hit my ribcage but kept him from interfering with nunchuck-ninja. Weaponless-ninja crept in from behind landing quick two-punch jabs at my back. This cycle of ducking one weapon to get hit with the other and a fist continued for a bit longer. I could avoid one or two of them in an attack before I got hit by the third and it was wearing me down. Frustrated, I got creative.

I slid to the ground in a perfect split and punched tonfa-ninja in the nads. When he doubled over to grab himself, I rolled backward onto my arms pushed into a spin kick that knocked him off his feet. About the same time he landed on his back I pushed up to land on my feet and charged weaponless-ninja. I pushed him back with a quick succession of jabs to both sides of his ribcage until we were stopped by a wall a junk. With the ninja dazed, I stepped back to finish him with a roundhouse that connected perfectly.

Somewhere in the middle of this fight my subconscious mind and active brain had synced and I could now dictate my actions instead of just going along for the ride. My victory was short lived though, as with my back to nunchuck-ninja I couldn’t see or duck his attack. My vision burst into stars when I got hit, first in the head then again in my lower back and I dropped to one knee. The pain was intense and I struggled to catch my breath and clear my vision. I could hear perfectly fine though and spun around on my knee to punch the remaining ninja in the gut. He stumbled backward giving me the precious seconds I needed to clear my head.

Nunchuck-ninja had also recovered and was advancing with his nunchucks swinging. I rolled forward under his arc and came up near the fallen tonfa-ninja. I smiled picking up the batons. Testing the weight and heft, I spun both to get used to the feel of the weapons in my hand.

When nunchuck-ninja advanced I was able to block with my forearms raised and return with a spin attack of my own. We parried for a bit before I spun my tonfa out so that a nunchuck wrapped around it. I swung my arm downward across my chest pulling the weapon out of his hand. It clattered on the ground and the ninja stepped back out of my reach spinning his remaining nunchuck under his arm.

We circled each other feigning attacks before I finally moved in spinning the tonfa. Nunchuck-ninja blocked most my advances, but where I had two weapons, he only had one and I was able to lock his nunchuck with one arm and jab him with the short end of the tonfa repeatedly until at last he fell.

I stood haggard over his unmoving form. My shoulders sagged from exertion, and my chest and arms ached. Every breath I took burned and I was sure I’d broken a rib, maybe two. A slow clap snapped my brain back to attention. The fifth ninja was applauding my efforts from the mouth of the stacks. I’d forgotten he was there. He looked at me with cold dark eyes. if i survived this, I’d never forget that stare. This fight wasn’t over yet. My heart sank ever so slightly.

The ninja reached into the folds of his shinobi shozoko and pulled out a kyoketsu-shoge, a steel blade attached to a chain. The phrase ‘get over here’ echoed in my head. This would not be an easy match. The ninja began to swing the shoge overhead before changing direction, down, across his chest, around his neck then back again. I struggled to keep up with the orientation of the blade and kept my arms on guard.

The first attack came quickly and without warning, the dagger flying straight at my head. On instinct without even thinking I flipped backward the dagger stopping right were my head was mere seconds ago. The ninja pulled his shoge back tossing it at me again. And so began our dance. I ran in every direction, up along the walls of junk and flipping to avoid the dagger. But while I was wearing myself out avoiding his attacks, the ninja hadn’t moved much himself.

I needed to get in close under his guard, but he kept me at bay with his ever moving dagger. Out of breath I fell to one knee, keeping myself upright with one of the tonfa. I only just lifted my guard in time for the chain to wrap around the tonfa and my arm.The ninja pulled at the chain but it didn’t not release, just tightened. I spun my arm in a tight circle, wrapping the chain more and taking a step forward. I repeated the action with my other arm bringing myself closer still, again and again until I was in his guard.

My arms were wrapped in his chain but I had enough slack between them that I could move them in back and forth in tight jabs. The short butt of the tonfa dug into the ninja’s chest pushing his backward. He let go of his weapon taking some steps back, then charged at me with a flurry of jabs and kicks. I blocked them all, the chains providing added protection to my guard. Still I dropped to my knees spent.

Another dagger materialized and the ninja swung with both hands in a downward strike. I met his wrists with the chain between my arms and held his attack. In a moment of clarity I realized I could die, right here and now. In a second that stretched on forever I gathered myself for one last attack. I pushed up with all my strength to flip up and over the ninja. His arms were caught in my chain which now twisted around his neck. We stood back to back, my arms pulling while his pushed against the chain at his neck. With one last burst of strength I screamed dropping to one knee. I pulled with all my might until the ninja finally stopped struggling.

The weight of the dead ninja was too much and I collapsed under it. I screamed at is came out as more of a roar. Again and again I screamed in primal rage, letting out all my confusion and hurt. At last I loosened my grip on the chains and tonfa and rolled the body off of me. I took a look around at the other ninja, still unmoving, then headed out of the junkyard and on towards home.

Epilogue
The next morning I found myself walking through my school like a zombie. Mindless I moved through the halls unfocused, barely aware of anything or anyone around me. In the locker room I changed into my gym clothes wondering about the events from the night before. I still didn’t know why this had happened, when I’d learned to fight, to kill. I just knew I had survived. I didn’t realize I was crying until my best friend Jeremy brought it to my attention.

“Hey man, are you okay?” he asked then taking in my baggy eyes and overall exhausted state added, “you look like crap warmed over.”

While Jeremy fought with his locker, I mumbled a response wiping away the warm tears from my face. I stood on shaky legs then leaned against the locker next to mine. I took a few deep breaths trying to bring my mind to focus, to command my body to move.

“Well, coach wants to see you in his office before practice,” Jeremy said pulling open the stuck door.

I mumbled thanks and shuffled to the coach’s office. He sat at his desk and I was surprised to see someone else in small room with him. The other man stood with his back to me, his posture rigid. I could see nothing of his face but he was wearing a black karate gi and it immediately brought me into sharp focus. My subconscious was buzzing. This very normal scenario was very wrong.

“Sit down Dale,” my coach said gesturing to the seat in front of his desk. I sat, still staring at the back of the stranger’s bald head. I looked closer his neck and saw purple bruising. My mouth opened slightly and I struggled to swallow. The man let out a grunt and I froze. I recognized the sound but it was impossible. He turned to face and I looked into the eyes of the man I had killed last night.

“I’m sure you have questions son,” my coach said. It barely registered to me, ” and we’ll answer every one of them now that your training is complete.”

I used some terms through this story that I’m sure many of you aren’t familiar with. I had to look them up myself so here’s a visual reference to help.

Tonfa: The buttons are held by the handle with the long end along the forearm. The long butt can be used defensivley while the short butt can be used to jab. You can also swing the tonfa along it’s handle to extend your reach. 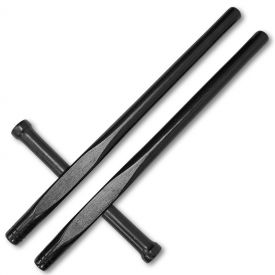 Kyoketsu-shoge: a dagger on a chain, usually has a hook as part of the blade. This weapon is commonly associated with the ninja Scorpion from Mortal Kombat

Shinobi shozoko: is the ninja’s clothing and is worn in different colors depending on the mission. For night missions the shinobi shozoku is typically black or dark blue.

I hope you guys had as much fun reading this as I did writing it. Till next time,